Stellar Banner to Be Scuttled Off Brazilian Coast 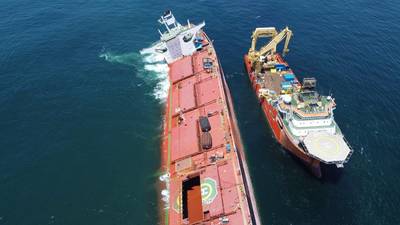 Stellar Banner suffered significant hull damage after running aground off the coast of Brazil in February/ (Photo: Brazilian Institute of Environment and Renewable Natural Resources)

A 340-meter-long very large ore carrier (VLOC) that ran aground off the coast of Brazil earlier this year will be scuttled due to the extent of hull damage suffered as a result of the incident, Brazilian authorities said.

The 300,660 dwt Stellar Banner, owned and operated by the South Korean company Polaris Shipping, ran aground while carrying iron ore bound for China from Vale's terminal in Maranhão in February. The 2016-built ship began listing heavily but did not capsize, and all 20 crew members were evacuated from the ship.

The ship was refloated and towed to deeper water last week after 145,000 metric tons of iron ore and 3,900 cubic meters of bunker fuel were lightered from the Marshall-Islands-flagged VLOC.

The Stellar Banner was declared a total loss following a structural inspection carried out by representatives of the ship's classification society, with support from divers and a remotely operated underwater vehicle (ROV), and will be scuttled about 150 kilometers from the coast of Maranhão.

The portion of cargo that will remain in the ship's holds does not pose risks to the environment, the Brazilian Navy said. Remaining oil and oily residue on board will be removed prior to scuttling.