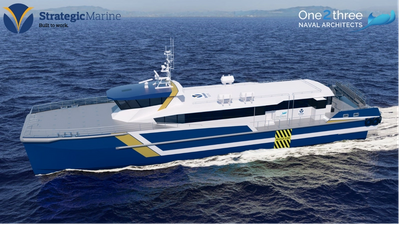 "The new vessel has been designed in collaboration with One2Three naval architects in Sydney Australia, incorporating direct feedback from customers," Strategic Marine said.

Greg Daniel, Technical Manager of Strategic Marine, said: “Our offshore customers are increasingly asking for faster transfers but still want to reduce their costs. Often helicopters are used but this is expensive and limited to small numbers (only about 10 crew at any one time).

"The new Strategic FCTV can provide fast transit for 80 passengers and crew, to and from offshore installations, traveling at 40 knots per hour, powered by four CAT C32 engines.  This new vessel offers a much more cost-effective, rapid transfer alternative and is suitable for longer distances.  We are confident that it will surpass our customers’ expectations, wherever they are in the world.”

According to Strategic Marine, the vessel can be fitted with a motion-compensated gangway offering a‘ walk to work’ safe transfer. Alternatively, the company said, the stern and the bow of the vessel are different heights above the water, so if the crew needs to do a swing rope transfer, they can choose the best option.

The vessel has been designed with a large open deck that covers a third of the vessel length to give space for maneuvers.  The area can also be fitted with a basket transfer crane which winches the crew up and down to the offshore installation if necessary.

The seating and accommodation area has been arranged to be in the midships of the vessels to reduce slamming and pitching motion, ensuring that those traveling on board are as comfortable as possible, the company said.

"The FCTV has a resiliently mounted superstructure which sits on a rubber base to insulate the passenger accommodation from noise.   As you would expect the engine is very noisy, especially when traveling at high speeds and with big waves, but this superstructure insulates the passenger space, dramatically reducing vibrations, making it much quieter and calmer for passengers onboard," Strategic Marine said.

"The FCTV is also fitted with water jets which are much quieter than propellers, very efficient at high speeds, and particularly maneuverable which is necessary up close to an offshore installation," the company added.

"The new vessel has the option for a biosafe notation and compared to helicopter transport it has a significantly lower fuel consumption saving fuel and reduced fuel consumption on a cost per head basis compared with a helicopter. Strategic will also apply a silicone antifouling coating to the FCTV. The company has been trialing the coating which is designed for fast-moving vessels, and had has found it to be exceptionally effective, stopping biofilm from adhering to the vessel hull with no biocide leaching into the water," the company said.