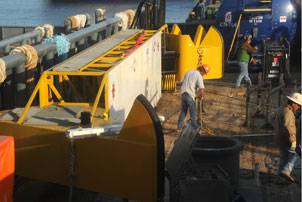 The Offshore Marine Service Association (OMSA) has proposed to BP and the U.S. Coast Guard that they create a smooth, efficient system to be sure vessel owners know what marine assets are needed to combat the Gulf oil spill, and to share with the Incident Command what vessels are available. OMSA, which represents the U.S. flag vessels that work in the offshore energy sector, has a number of member vessels that are currently involved in the cleanup effort, including skimming activities, working to control the leak at its source and setting out boom along the shore.

"Given the magnitude of the crisis we are addressing, it makes sense to set up direct communications between the industry as a group and the Incident Command, so that we can meet the needs of the spill head-on and in real time. Frankly, the Coast Guard should have done this weeks ago," said Ken Wells, OMSA President.

He noted that because of the moratorium on deepwater drilling and the effective moratorium on all new shallow water drilling, between 100 to 200 American offshore vessels may be without work soon, resulting in potential layoffs for thousands of mariners and shoreside personnel that support the offshore workboat industry. "We proposed last Monday that if BP and the Coast Guard will immediately set up a system to let us know their needs, we should be able to meet the requirements of the response effort without disruption. We hope that they are giving our proposal serious consideration," said Wells.

He pointed out that the Coast Guard recently indicated it had more than 400 vessels at work on skimming operations, making this the largest number of skimming vessels ever put to work in the Gulf of Mexico at one time. The Coast Guard has also recently sent out requests to industry to locate every additional available skimming unit in the country and even the world. "But the issue is complicated by the fact that there are a number of different situations requiring different types of vessels. A ‘skimmer’ can be an unmanned floating device, a 16-ft boat equipped with a boom or a small skimming unit, a fishing troller or shrimp boat, a 180-ft offshore supply vessel, or a specialty-built Oil Spill Response Vessel. Each type of vessel has its own application, and we suspect there are significant needs for each. But we will not know that unless and until BP and the Coast Guard indicate that. To the extent that offshore supply vessels equipped with skimming units and storage tanks are needed, we want to make sure that as these skimming units are shipped here, there are American vessels ready to install them and get to work," Wells said.

Wells also noted that there has been some attention focused on the Jones Act, which says that vessels that carry cargo between places in the U.S. must be built in America, owned by Americans and crewed by Americans. The U.S. Maritime Administration (MARAD) testified before Congress on Thursday, June 17th that if it is necessary to waive the Jones Act, that can be done very quickly.

According to MARAD testimony, there has been only one request to waive the Jones Act and that was addressed in less than 24 hours. Wells stated, "clearly, if we need to bring in foreign boats, the Jones Act process can accomplish that with no delay and our industry will not stand in the way. At the same time, we need to make sure that American vessels and American mariners who are or will soon be out of work as a result of this catastrophe or the government's response are not left unemployed. American vessels are here, ready willing and able to further contribute to this response effort. We simply need clear direction and communication from our government."