Kevin Michael under way at the Melvin Price Locks and Dam after the casualty. (Photo: U.S. Coast Guard)

The contact between a tow and a section of the Melvin Price Locks and Dam in Alton, Ill., was caused by the pilot of the towing vessel not effectively compensating for a strong outdraft and wind, the National Transportation Safety Board (NTSB) said Thursday.

On March 19, 2021, the 177-foot-long towing vessel Kevin Michael was pushing 15 barges down the Mississippi River when the tow struck the bull nose of the Melvin Price Locks and Dam upstream main lock chamber guide wall, resulting in the tow breaking apart and damaging the dam gates. No injuries or pollution were reported. The contact resulted in $1.2 million in damages to the barges and dam gates.

While approaching the upstream lock of the Melvin Price Locks and Dam, the pilot of the Kevin Michael attempted to move the tow near the left descending bank of the river, according to the NTSB’s Marine Investigation Report. Despite lining up in a position he felt would provide for a successful approach to the forebay, the tow slowly slid toward the center of the river and contacted the guide wall. The pilot was unsuccessful because the forces of the dam-induced outdraft and wind acting on the tow overcame the developed forces of the Kevin Michael’s engines and rudders from his orders, setting the tow to starboard and toward the center of the river before contacting the guide wall’s bull nose.

Based on a safety improvement effort in response to several casualties where vessels contacted the Melvin Price Locks and Dam guide wall, the U.S. Army Corps of Engineers, in 2018, moved the sailing line—the preferred or recommended route within the reaches of a navigable channel. The sailing line was moved toward the left descending bank of the river to compensate for the outdraft. The pilot’s course was not as close to the bank as the revised sailing line, which left him with less room to compensate for the strong outdraft and high winds as the Kevin Michael approached the locks. 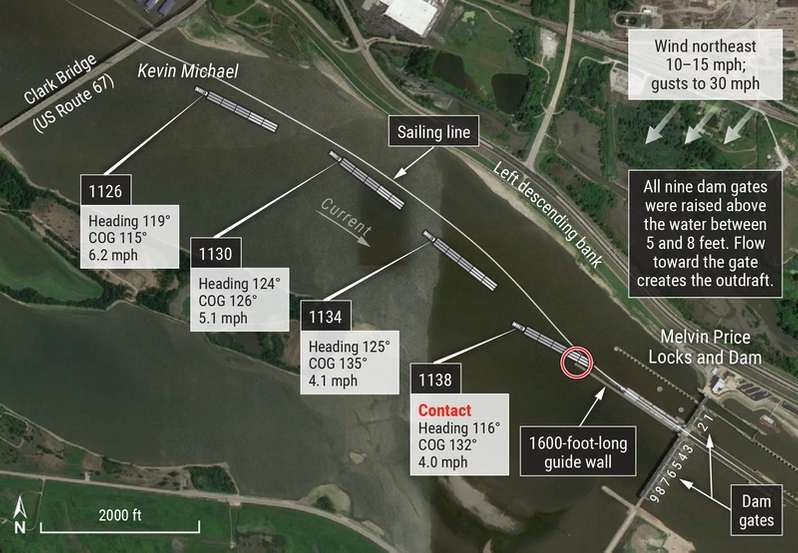 The NTSB determined the probable cause of the contact of the Kevin Michael tow with the Melvin Price Locks and Dam guide wall was the Kevin Michael pilot not effectively compensating for the strong outdraft and wind above the dam while navigating toward the lock during a period of high-flow conditions.

“Generally, a sailing line is assigned to a known safe and optimal route used by commercial vessels,” the report said. “A sailing line is developed under considerations of channel depth, current patterns, and any other known obstructions to navigation. In some areas, a sailing line is positioned to address a specific navigational hazard, such as the outdraft near the Melvin Price Locks and Dam. A charted sailing line provides for a safe and successful transit when used as a guide along with the mariner’s own experience and assessment of the existing circumstances.”