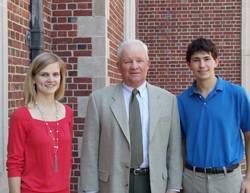 Two undergraduate students, Andrew Lachtman and Lidia Mouravieff, at the Webb Institute in Glen Cove, N.Y. were awarded Thomas B. Crowley Sr. Memorial scholarships for their community service and academic achievements.
Retired U.S. Coast Guard Rear Adm. Robert C. Olsen, Jr., president of Webb Institute, presented Mouravieff and Lachtman with Crowley scholarships for the 2010-2011 academic year. The Crowley scholarship, which was established at Webb in 2008, is awarded to students who demonstrate leadership in academics and the community and have an interest in the maritime industry.
"These are the most prestigious scholarships for Webb students because they are selected based on their demonstrated leadership abilities along with academic performance," said Olsen. "Furthermore, a committee of staff and faculty make the selections. I am particularly pleased about this gift from Crowley because it helps us emphasize the importance of leadership to our students in a very visible and important way."
Lachtman, a native of San Diego, Calif., is involved in several school activities and is currently serving as chairman of Webb's Honor Council, which is responsible for resolving violations of the student honor code. Lachtman is a member of several professional societies, including the U.S. Green Building Council, the Society of Naval Architects and Marine Engineers, the American Society of Naval Engineers and the Marine Technology Society. He has also been a member of Webb's volleyball team and is an avid cyclist and runner.
Mouravieff, who is also a member of the Society of Naval Architects and Marine Engineers, the American Society of Naval Engineers and the Marine Technology Society, is from Washington, N.J. She is a member of the Webb band, soccer team, student court and serves as the social committee chairperson.
Over the years, Crowley Chairman, President and CEO, Tom Crowley Jr., has continued to give scholarship dollars to deserving students at the maritime academies and other select institutions in the U.S., Puerto Rico and Central America in the name of his father Thomas B. Crowley Sr., who guided the company to extraordinary heights before passing away in 1994.