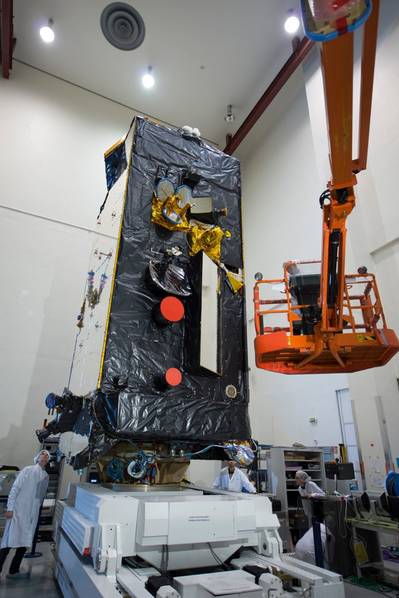 Alphasat was launched on an Ariane 5 ECA, the latest version of the Ariane 5 launcher, from the Guiana Space Centre in Kourou, French Guiana at 20.54hrs BST on 25th July (16.54hrs Kourou local time).  Arianespace confirmed a successful spacecraft separation at 27 minutes 45 seconds after launch and the Alphasat Mission Operations Team confirmed telemetry reception and that they have command of the satellite at 21.47 BST.

Inmarsat satellites are currently relied on by the world’s shipping, oil exploration, defence, aviation and media industries, amongst others, to service their communications needs. Inmarsat is also the communications channel of choice for the media when reporting from the world’s danger zones and for NGOs, government agencies and the United Nations when coordinating rescue efforts.

Inmarsat is the owner and operator of Alphasat, one of the most technically advanced telecommunications satellites ever constructed for civilian applications. With a US$350 million investment from Inmarsat, Alphasat complements the company’s award-winning L-band satellite fleet, which has been powering global broadband connectivity for government and commercial customers on land, sea and in the air since 2009.

With the successful acquisition of the satellite confirmed, the Alphasat Mission Operations Team will complete partial solar array deployment overnight and commence orbit-raising on Friday night, to place the satellite into its final geostationary orbit position. This operation is scheduled to be completed on the morning of July 31st.

Rupert Pearce, CEO of Inmarsat, said: “Alphasat will strengthen our existing I-4 series satellite constellation, providing coverage over Europe, the Middle East and Africa. The launch demonstrates Inmarsat’s long-term commitment to L-band services, and marks a significant milestone in the evolution of Inmarsat’s flagship satellite fleet, bringing new capabilities both in terms of performance and resource availability.

“I would like to pay tribute to the skill and expertise of Inmarsat’s engineering teams and all our employees involved in today’s launch.  It is their dedication – alongside the outstanding support we have received from our development, manufacturing and launch partners – which has helped deliver such a successful outcome.”

Designed and manufactured by Astrium, Alphasat is the largest and most sophisticated European telecommunications satellite ever built. It is part of the European Space Agency (ESA) initiative to provide a new spacecraft platform (Alphabus) capable of carrying a large state of the art communications payload. Developed by Astrium and Thales Alenia Space under a joint ESA and CNES contract,

Alphabus allows the European space hardware manufacturing industry to address the top end of the telecom satellite market. It is also a showcase of Astrium’s capability in the areas of satellite mobile payloads and on-board digital signal processing, particularly in the UK.