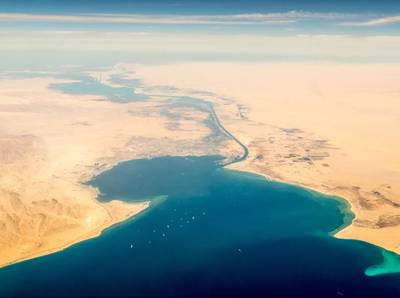 The SCA announced accelerated plans to extend a second channel of the canal and to enlarge an existing channel after the Ever Given container ship ran aground and blocked the waterway for six days last year.

"The project will be completed in 24 months. We started in July 2021 and God willing we will finish in July 2023," Chairman Osama Rabie said on the sidelines of an event in Dubai.

Ships pass through the canal in convoys, and the extension of the second lane would increase capacity by six ships, Rabie said, without giving further details.

The southernmost 30 km of the canal, where the Ever Given became grounded, is set to be widened 40 meters eastward and deepened to 72 feet from 66 feet, according to previously announced plans.

"This will improve ship navigation by 28% in this difficult part of the canal," Rabie said.

The Suez Canal Authority and its companies were developing the entire project, he said.

Asked about shipments of Iranian fuel or oil passing through the Suez Canal despite U.S. sanctions on Iranian oil sales, he said: "There's no discrimination when it comes to a country flag on ships, and Iranian oil does pass through the canal."

(Reporting by Alexander Cornwell in Dubai and Sarah El Safty in Cairo; Writing by Aidan Lewis, Editing by Angus MacSwan)