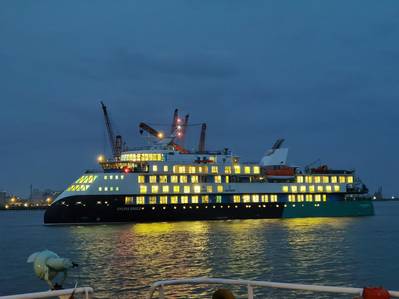 The newbuild, designed by Ulstein and built by China Merchants Heavy Industry, underwent five days of intense testing of the vessel’s systems while underway in the south China Sea. More than 150 people were onboard during the trials, including represntatives from the shipyard, class society Bureau Veritas, CMI managers crew and SunStone Marine Advisors.

Sylvia Earle will operate on charter to Aurora Expeditions.

Infinity Class vessels are 104 meters long, and 18 meters wide, with a draft of 5.1 meters. They feature a passenger capacity between 130-200 and a crew capacity between 85 and 115. The vessels are Ice Class 1A, Polar Code 6 and are being built with safe return to port, dynamic positioning and zero speed stabilizing. Designed to be small enough to give an exclusive atmosphere and yet large enough to yield all expected services, they feature facilities such as a swimming pool, bar and restaurants, lounges, boutique, gym and spa.

In addition to the Infinity series, SunStone Ships has commercial management of a fleet of seven vessels on long-term charter, mainly for the small ship/expedition ship market.