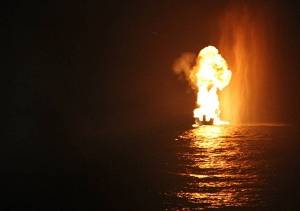 On 28 March 2011, the EU NAVFOR Spanish warship SPS Canarias disrupted a suspected Pirate Action Group (PAG), consisting of a whaler-style boat and a skiff, 260 Nautical Miles North-West of the Seychelles after a fishing vessel reported the PAGs presence to the warship.

Early morning on 28 March, the Seychellois flagged fishing vessel reported that a whaler and a skiff had approached her in a suspicious manner with automatic weapons and a Rocket Propelled Grenade(RPG) clearly visible. The EU NAVFOR warship immediately made her way to the scene and launched her SH-60B helicopter to investigate further.
After two attempts by the Whaler to flee the scene, the helicopter was forced to fire warning shots in front of the vessel to make it stop. The occupants of the whaler were observed throwing items of equipment overboard just before the SPS Canarias arrived. Having been stopped by the helicopter, the whaler and the skiff were boarded by a team from the Spanish warship and 11 suspected pirates detained. The whaler was taken alongside by the warship and the skiff was destroyed.
After presenting the case to the Seychellois authorities, it has been agreed to transfer the suspected pirates to the Seychelles for prosecution. These suspected pirates, who were allegedly plying their trade against a Seychellois vessel, will now face Seychellois justice.