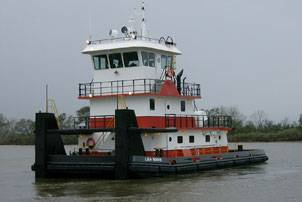 Photos of the Lisa Marie courtesy of Hope Services

When Holcim (U.S.) Inc. began construction of their new state-of-the-art plant in 2006 they wanted it to be a model of environmental sustainability. The plant and quarry in Ste. Genevieve County, Missouri on the Mississippi River about 40 miles south of St. Louis would occupy only 1,700 acres of the 3,900-acres site, with the balance preserved as a conservation easement. Holcim also created and restored more than 60 acres of new wetlands, offering a large habitat resource. With production capacity of four million metric tons per year, following the plant’s start-up in 2009, they would require large amounts of material in and product out. Approximately 75 percent of the plant’s materials and products will be received and shipped by river, one of the most environmentally friendly modes of transportation. To meet this requirement they built a harbor on the Mississippi River.

Holcim has contracted with Brennan Marine to provide fleeting services for the Harbor. To meet the requirements of this important contract, Brennan Marine have had a pair of Cummins-powered towboats built and delivered from Hope Services of Dulac, Louisiana.

The two new vessels, M/V Roger Binsfeld delivered June 2009 and the M/V Lisa Marie delivered in December 2009, are built to a well-proven design. The 72 by 30-foot push boat has a ten foot molded depth. Extra strengthening has been added to the push knees and hull to cope with the riggers of fleet operations at the Holcim plant. In keeping with the environmentally conscious nature of the firms involved, the new boats are each powered by a pair of Cummins popular Tier 2 certified K38-M mains each delivering 1000 HP at 1800 RPM.