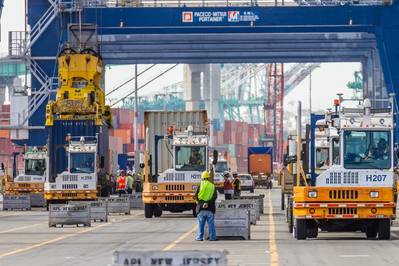 Members of Congress have joined state and local leaders in urging California officials to hasten COVID-19 vaccinations for workers at the ports of Los Angeles and Long Beach, the nation's two busiest, hit hard by pandemic workforce disruptions and surging imports.

As of Wednesday, 27 arriving container ships stood anchored off the twin ports complex waiting for berths to clear at terminals piled high with cargo from previous shipments, according to the Marine Exchange of Southern California.

The bottlenecks are comparable to those last seen in 2014-2015 at the height of a months-long longshore contract dispute at 29 U.S. West Coast ports, said Kip Louttit, executive director of the exchange.

COVID-19 outbreaks among dockworkers and safety restrictions aimed at curbing the spread of the virus have bogged down container-freight traffic in recent months, just as ports face a cargo surge attributed to rising consumer demand for bulk products during the pandemic.

The two ports, which together account for nearly half of all U.S. maritime trade and some 70 percent of the nation's imports from Asia, have struggled as imports rose more than 24% in December.

The unexpected spike began over the summer with retailers racing to rebuild inventories of everything from appliances and gardening supplies to furniture and home exercise equipment products that sold out quickly when Americans shifted spending away from restaurants, travel and other entertainment.

An estimated 2,000 dockworkers have been idled due to COVID illness or quarantine, U.S. Representatives Nanette Diaz Barragan and Alan Lowenthal, two Democrats whose districts encompass the ports, wrote in a Jan. 15 letter to California health authorities.

"Without immediate action, terminals at the largest port complex in America may face the very real danger of terminal shutdowns," the letter warned.

A similar letter on Jan. 12 which also went to Governor Gavin Newsom and the state's top epidemiologist was signed by Lowenthal, the mayors of Los Angeles and Long Beach, two state lawmakers and two other city officials.

Both letters asked state authorities to elevate cargo handlers at the two ports to a higher priority for COVID vaccinations along with other labor, such as grocery workers, designated as essential.

Roughly 700 of 15,000 dockworkers employed at both ports have tested positive for COVID since the start of the pandemic, Los Angeles Port executive director Gene Seroka said.

"When you're in the middle of all this import cargo, having another 700 folks down—or whatever the number is including quarantine and isolation—it's concerning," Seroka said. "We'll continue to have spot shortages at terminals and on the docks."

"This is a concern for trade movement throughout the country," he said.

Global seaborne coal trade rose by 5.7% last year, driven by rising demand from steelmakers for coking coal and its products…