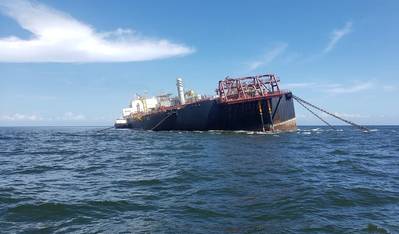 Environmental groups have in the past two weeks expressed concern about a potential spill of the 1.3 million barrels of crude aboard the Nabarima oil facility - part of the Petrosucre joint venture between PDVSA and Italy's Eni SpA - after images showed the vessel tilting to its side.

PDVSA now plans to offload some of the crude on board via a ship-to-ship (STS) transfer involving the Icaro, an Aframax vessel it owns, a person familiar with the matter told Reuters on Monday. The Refinitiv Eikon data showed the Icaro approached the Nabarima at 2:37 p.m. local time (1837 GMT).

The Venezuela-flagged barge Inmaculada was also expected to participate in the STS operation, which carries its own set of risks, according to a person familiar with the matter and a document seen by Reuters.

PDVSA did not immediately respond to a request for comment.

Authorities in neighboring Trinidad and Tobago have said they planned to inspect the vessel, which is located in the Paria Gulf separating the two countries.

Petrosucre, which is 74% owned by PDVSA and 26% owned by Eni, suspended output shortly after Washington sanctioned PDVSA in January 2019, as the sanctions deprived the company of its former main crude buyer, PDVSA's U.S.-based refining subsidiary, Citgo Petroleum Corp

The United States in December 2019 placed additional sanctions on the Icaro vessel itself for delivering Venezuelan petroleum products to Cuba, one of President Nicolas Maduro's main overseas allies. The Trump administration is trying to oust Maduro, whom it labels a dictator.