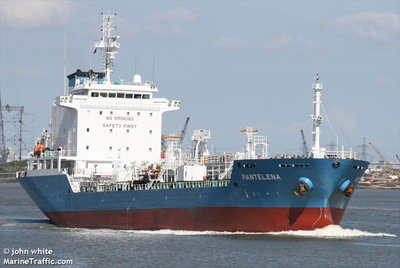 A tanker vessel with 19 crew members on board, most of them Georgians, has gone missing in pirate-plagued waters off Gabon in West Africa and no word has been heard from it for a week, the ship's managers and the crew agency said on Wednesday.

Communication was lost with the Panama-registered Pantelena at about 2 a.m. local time on Aug. 14, at which time it was about 17 miles from the port of Libreville, in Gabon, Athens-based Lotus Shipping said in a statement.

The head of the Georgian crew agency Ialkani, Anzhela Oganesyan, said two Russian nationals and 17 Georgians were aboard the tanker. She said she had no news so far about the vessel's fate.

The Georgian government also said 17 of its citizens were serving on the Pantelena.

The Russian RIA news agency reported the Russian Embassy in Gabon as saying two Russians were on the tanker and it was in contact with their relatives.

Lotus gave no further details on the cargo and crew, and did not say if it believed the Pantelena had been hijacked by pirates. The vessel is a dual purpose oil or chemicals tanker.

"We at Lotus Shipping, acting on behalf of the vessel's owners...have set as our first and foremost priority to safeguard the safety of the crew and with their interest in mind we cannot provide any additional media comments at this point in time," it said.

The Pantelena was on route from Lome to Libreville and was last seen nearing the Gabon coast at 9 p.m. on Aug. 13, according to ship tracking data on Reuters, which lists the ship as a double-hulled oil tanker managed by Lotus.

While piracy has decreased worldwide, the Gulf of Guinea has become an increasing target for pirates who steal cargo and demand ransoms. Piracy-related issues were a decade ago focused off the East African coast, particularly Somalia’s unpoliced waters.

Ships in the Gulf of Guinea were the target of a series of piracy-related incidents last year, according to a report in January by the International Maritime Bureau (IMB), which highlighted the waters off West Africa as an area of growing concern.

Ten incidents of kidnapping involving 65 crew members took place in or around Nigerian waters, the IMB said. Globally 16 vessels reported being fired upon, seven of which were in the Gulf of Guinea.