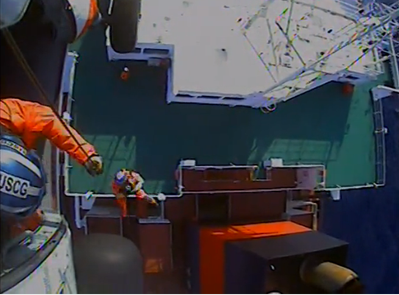 A tanker crew member was medevaced approximately 400 miles off the coast of Virginia, Friday evening.

Watchstanders at the U.S. Coast Guard’s Fifth District command center were notified by a crewmember on the Marshall Islands flagged ship Arctic Flounder that a chief officer aboard had shown symptoms of a possible stroke.

Aircrews aboard an MH-60 Jayhawk helicopter and an HC-130 Hercules airplane from Air Station Elizabeth City, N.C. launched to assist.

Due to the extensive distance, the Coast Guard Fifth District coordinated with U.S. Fleet Forces Command to have the helicopter land on the USS Arleigh Burke to refuel before conducting the medevac.

Once refueled, the aircrews met the Arctic Flounder and hoisted the man onto the helicopter. They transported him to Norfolk Sentara General Hospital in Norfolk, Va.

“The seamless coordination between U.S. Fleet Forces Command, the Coast Guard and the Arctic Flounder was key to the operation,” said Senior Chief Petty Officer Robert Delano, command duty officer during the case. “Without the assistance of the Arleigh Burke, we would've had to wait for the ship to make it closer to shore, in a situation where time is of the essence and a person’s life is at stake.”

A Kuwaiti livestock ship, without animals aboard, was being held off Australia’s west coast after six crew members tested…