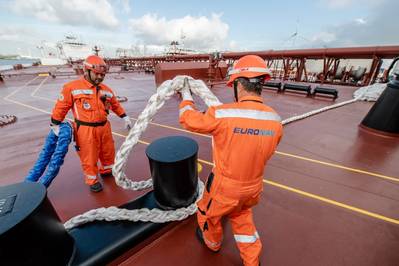 Frontline signaled optimism over its planned merger with rival Euronav on Tuesday, supported by recovering oil tanker markets in the first quarter and expectations of tight vessel supply in the coming years.

The crude shipping market has struggled with low earnings since the pandemic first hit oil transport demand two years ago.

This year's sanctions against Russia following the invasion of Ukraine has disrupted trade flows, however, and both crude and oil products take longer voyages to reach European markets, which reduces the supply of vessels and supports shipping rates.

While it's too early to call a cyclical turn for the industry, fundamentals remain attractive, Frontline's Chief Executive Lars H. Barstad said in a statement.

"With this backdrop we are very excited working on the proposed combination with Euronav, forming the largest listed tanker owner in the world," Barstad said.

Euronav said last week it had received "a clear signal" from shareholders in support of its proposed $4.2-billion merger with its smaller rival.

Oslo-listed Frontline reported an adjusted net loss of $1.6 million in the January-March period, compared with the $4.8 million loss in the year-ago period.