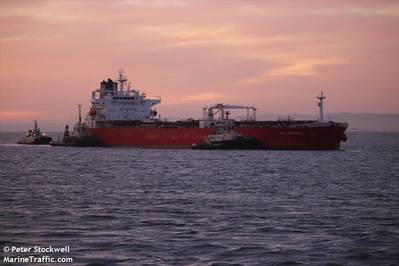 The operator of an oil tanker stormed in the English Channel by British special forces thanked the authorities on Monday for their timely response, saying help was requested after seven stowaways who boarded in Nigeria turned hostile.

Troops from the Special Boat Service, Britain's elite naval special forces unit, boarded the Greek-operated Nave Andromeda near the Isle of Wight off southern England after the master of the ship said he was concerned about the safety of his crew.

Defense Secretary Ben Wallace and Home Secretary Priti Patel authorized the armed forces to board the tanker "to safeguard life and secure a ship that was subject to suspected hijacking", the defense ministry said.

Sources with knowledge of the situation aboard the vessel said it was not a hijacking or hostage-taking. The seven stowaways, who boarded in Lagos, had become threatening towards the crew, the sources said.

"The UK authorities had been advised by the Master that stowaways had been found on board and that he was concerned for the safety of the crew due to the increasingly hostile behaviour of the stowaways," Athens-based Navios Tanker Management said.

"Happily no crew members were injured and all are safe and well," it said. "Navios Tanker Management wish to thank all the UK Authorities involved in this operation for their timely and professional response."

The seven stowaways were detained in the operation involving the SBS, the navy, coast guard and police.

"Navios would also like to pay tribute to the Master of the Nave Andromeda for his exemplary response and calmness and to all the crew for their fortitude in a difficult situation," the ship operator said.

The defense ministry declined to confirm or deny the involvement of the SBS - in line with British government policy of not commenting on special forces operations.

But a source with knowledge of the matter said the SBS were involved. SBS operations are usually classified.

The navy's Special Boat Service considered a sister unit to the Special Air Service Regiment (SAS), is one of Britain's most secretive special forces units.

An elite maritime counter-terrorism unit, the SBS traces its history back to World War Two and has been involved in many of the conflicts of the past 70 years including Afghanistan and Iraq.

The SBS's closest equivalent in the United States is the SEAL Team Six, or Task Force Blue.