by Natalia Chumakova and Maxim Nazarov May 14, 2020 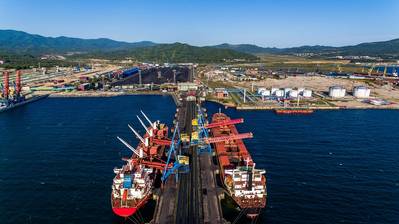 Rare cargoes of diesel from China and South Korea have started to arrive in Russia due to a quirk in Russia's tax system which is making fuel shipments from abroad more profitable, data from traders and Refinitiv Eikon showed on Thursday.

Because of a local tax scheme, Russian oil firms are due to make higher payments to the government despite a slump in oil prices due to excess supplies and the economic fallout from the coronavirus pandemic.

That means the companies have little incentive to cut domestic retail prices for gasoline and diesel.

But with prices lower on the global market, that is creating an opportunity to buy in supplies from abroad at a profit.

According to Refinitiv Eikon data, the Zaliv Vostock tanker arrived at the Russian Pacific port of Nakhodka on May 12 with 4,000 tonnes of diesel from the Chinese port of Yangshan.

The price of the cargo has not been disclosed. However, one trader said the fuel shipment would be profitable.

Another industry source said the Mercury tanker had brought 1,500 tonnes of diesel from Busan in South Korea to Vladivostok in Russia.

Traders said diesel imports could be as much as 25,000 roubles ($337) per tonne cheaper than on the domestic market.

Maintenance works at refineries in Russian Far East, including at Khabarovsk and Komsomolsky plants, are also encouraging more imports.

However, Russia plans to introduce a ban on fuel imports, although the ban has not been enforced yet.

The move is mainly aimed at preventing imports from neighbouring Belarus, where production of refined products is three times higher than its consumption.

According to railways data, Belarus has exported more than 46,000 tonnes of gasoline and over 34,000 tonnes of diesel to Russia since the end of March.