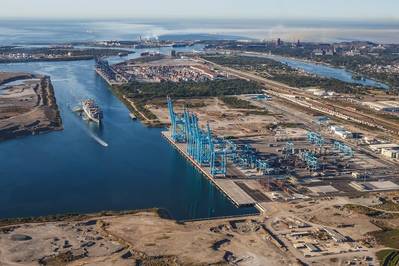 “This is a milestone as we add an additional operational terminal to our portfolio. A priority for us is to transition terminals under implementation into operation, and make them as efficient as possible to support our customers.” said Morten H. Engelstoft, CEO of APM Terminals.
“We have a significant portfolio across Latin America, and this will be our second terminal in Mexico after Yucatan. We are pleased to be a contributor in helping Mexico to reach its growth ambitions,” Morten added.
APM Terminals Lazaro Cardenas is state-of-the-art with semi-automated processes that are geared toward delivering higher productivity and availability for clients as well as contributing to Mexican trade growth by offering a new gateway for commerce between the second-largest economy in Latin America and the rest of the world.
“Mexico is a core part of our strategy of investing in growth markets and building stateof-the-art facilities to run more efficiently the supply chain from the heart of Mexico to Asia and the rest of the Americas,” says Jose Rueda, Managing Director for APM Terminals in Mexico.
“The technology in this terminal will bring increased predictability and efficiency to our shipping line customers, whilst ensuring the highest levels of safety for our employees and supply chain partners.” he adds.
“In addition to servicing ships, the new terminal in Lazaro Cardenas will enable us to further contribute to the nation’s growth story and long-term competitiveness by offering efficient, safe and reliable terminal services to producers and manufacturers. With the capacity to receive the world’s biggest ships and provide additional connectivity inland via our terminal at Cuautitlan Izcalli, in the industrial zone of Mexico City which is surrounded by over 200 onward distribution centers, we are in a unique position to facilitate trade for the country,” says Rueda.
With the first phase of the terminal complete, APM Terminals Lazaro Cardenas occupies an area of 49 hectares, with a quay of 750 meters in length for ships and a depth of 16.5m, deep enough to receive some of the world’s largest ships. The terminal is connected to five rail tracks and offers gate services for land-side customers.
By the final phase of the terminal buildout, which is scheduled to happen between 2027 and 2030, the terminal’s water depth will increase to 18m.
By then, the terminal will have a quay 1.5 km long in a total area of 102 hectares and a capacity of 4.1 million TEUs, operated by 15 STS cranes and 10 rail tracks, providing intermodal access. By the final phase, the total investment cost will come to US$900 million.
Mexico handles Latin America’s third largest container volume, behind only Brazil and Panama.