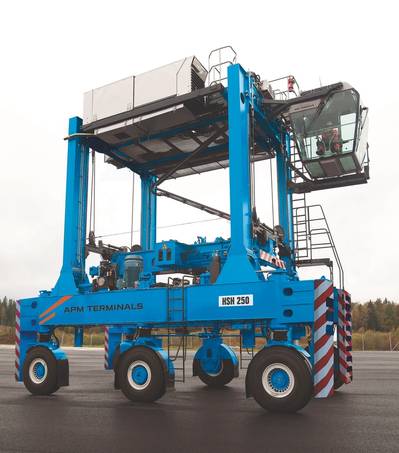 Kalmar, part of Cargotec, has signed a contract with APM Terminals to deliver 30 Kalmar Hybrid Shuttle Carriers with high level of automation readiness as well as the related service and support to the customer's MedPort Terminal in Tangier, Marocco. The order was booked into Cargotec's 2016 fourth quarter order intake and the delivery is estimated to be completed by the end of 2018. This is Kalmar's biggest single order for horizontal transportation to date.

The Tangier-Med 2 port is a greenfield transshipment terminal that is scheduled to be opened in 2019. It will serve the major shipping routes between Europe, Africa and Far East and respond to the anticipated significant cargo traffic increase in Africa in the coming years.

"We are happy that APM Terminals chose our hybrid shuttle carriers to their major expansion project serving the Mediterranean Sea. Our equipment will be delivered with high readiness for automation, and we will configure, test and pre-integrate the shuttles so that the future conversion to fully automated horizontal transportation solution can be done quickly. Testing will be done both on- and off-site," says Tero Kokko, Senior Vice President, Automation and Projects at Kalmar.

The Kalmar solution will help the terminal to mitigate risks in moving into automated operations in advance, as well as enable maximisation of ASC (Automatic Stacking Crane) productivity by decoupling the landside operations from quay and truck lane operations at the terminal.

The Kalmar Hybrid Straddle carrier is a field proven product, consuming up to 40 per cent less fuel and cutting annual CO2 emissions by over 50 tons per carrier compared to existing diesel-electric designs.

APM Terminals already operates the APM Terminals Tangier facility at Tangier-Med 1, which started operations in July of 2007 and handled 1.7 million TEUs in 2015. The new terminal will have annual capacity of five million TEUs.