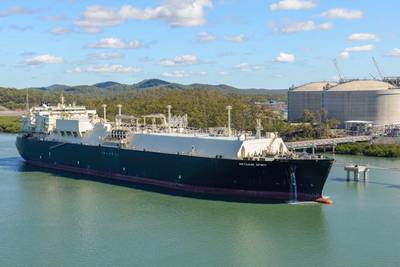 If correct, that could be the first vessel to pick up a cargo from the LNG facility, which Virginia-based Dominion said it expects to enter service in March.

Dominion said it planned to spend $4 billion to add export facilities at Cove Point, long an LNG import terminal on the Chesapeake Bay.

The Methane Spirit is currently off the coast of Japan where it was expected to drop off a cargo from Australia, according to the shipping data.

Once it enters service, Cove Point will be the second big LNG export terminal in the lower 48 U.S. states after Cheniere Energy Inc's Sabine Pass terminal in Louisiana, which exported its first cargo in February 2016.

Cove Point is designed to liquefy about 0.75 billion cubic feet per day (bcfd) of gas. One bcfd can power about 5 million homes.

Dominion sold the project's capacity for 20 years to a subsidiary of GAIL (India) Ltd and to ST Cove Point, a joint venture of units of Japanese trading company Sumitomo Corp and Tokyo Gas Co Ltd.

Some of the LNG going to ST Cove Point will go to Tokyo Gas and some will go to Kansai Electric Power Co Inc, according to Sumitomo's Pacific Summit Energy (PSE) unit.

PSE agreed in 2013 to buy 0.35 bcfd of gas from Cabot Oil & Gas Corp's production in the Marcellus shale in Pennsylvania and West Virginia for 20 years once Cove Point enters service.