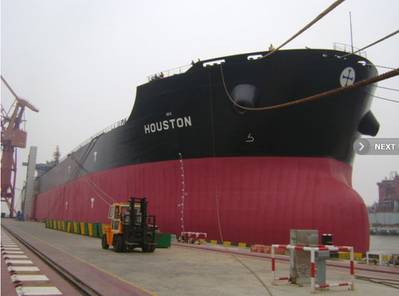 Diana Shipping subsidiary Gala Properties Inc. has received a notice from the charterers of the 'M/V Houston' claiming that they are entitled to terminate the vessel's charter effective November 26, 2013 for purported breaches by the owners. A claim they firmly dispute as follows:

Despite efforts by the owners to resolve the dispute with the charterers, the charterers have been unwilling to remedy their breach and anticipatory repudiation and/or renunciation of the charter by withdrawing their wrongful termination and providing the vessel with employment orders in accordance with the charter.

Owners have informed the charterers that their conduct constitutes a continuing repudiatory and/or renunciatory breach of the charter bringing the charterparty to an end. Owners will now seek to mitigate their losses as a result of the charterers’ breach and reserve all their rights  to claim such losses from charterers and/or to take appropriate steps to protect their position.

Background
The vessel MV Houston was time chartered to Shagang Shipping Company Limited a guaranteed nominee of the Jiangsu Shagang Group Co., at a gross charter hire rate of $55,000 per day for a period of a minimum of fifty-nine (59) months and a maximum of sixty-two (62) months. The charter commenced on November 3, 2009 and has an initial termination date of October 3, 2014.