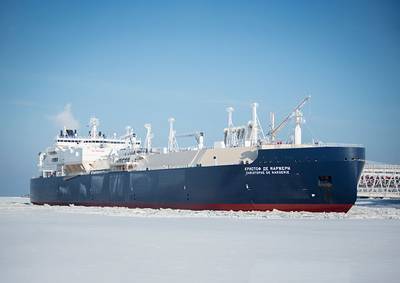 Unseasonably severe ice conditions are also clogging routes to Asia through the Northern Sea Route (NSR), leading to the extension of the winter-spring navigation of Atomflot's nuclear ice-breakers, it said.

The Novatek-operated LNG facility's fleet of LNG ice-breaking tankers aim to deliver gas to Northeast Asia along the NSR in summertime when ice sheets thin.

In winter, LNG tankers take a westward route to Europe, where cargoes will be reloaded onto waiting tankers for onward transport to Asia.

However, ice has formed on the sea channel in Ob Bay - where Yamal LNG is located - which has "paralysed the independent movement of ships," it said.

The company said it will extend deployment of its nuclear-powered ice-breakers in the Bay for at least the first 10 days of July and go about dislodging ships stuck in the ice.

Shipping data shows the Boris Vilkitsky tanker loaded LNG at Yamal on June 14 but remains in the area. The Christoph de Margerie LNG vessel has remained stationed north of Yamal for almost a week.