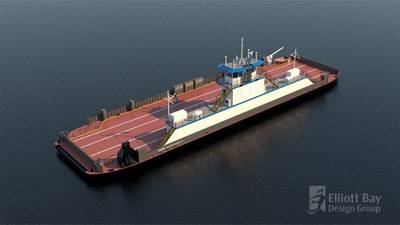 Tthe Louisiana Department of Transportation and Development (DOTD) announced this week that it received an apparent low bid from Houma, La. based Thoma-Sea Marine Constructors for the construction of two new ferry boats for the Cameron crossing in Cameron Parish. The bid was $49,706,865.

Designed by Elliott Bay Design Group, the new boats will be 190’ x 50’ x 13’ and will replace the M/V Cameron II, which was built in 1964. The boats will be end-loading vessels in order to load and unload large commercial vehicles. Two boats will be built so that ferry service will continue uninterrupted when one vessel undergoes required dry docking as per U.S. Coast Guard regulations.

“The construction of two new Cameron ferries is exciting news not only for southwest Louisiana, but also for the state and nation,” said Governor John Bel Edwards. “Cameron Parish is essential to our country’s oil and gas industries, and it’s a popular spot for outdoor enthusiasts from all over. The new ferry boats will enhance the parish’s infrastructure and increase the consistency and quality of life for industry, residents, and visitors.”

“The new ferries in Cameron are a welcome addition to our state’s infrastructure system,” said DOTD Secretary Shawn D. Wilson, Ph.D. “Allowing uninterrupted service to all vehicles, including commercial vehicles, is a major advantage to the area’s economic development. With regards to asset management, this will reduce maintenance expenditures and performance disruption. I wish we could modernize our equipment and fleet accordingly. The new ferries will also provide continuity for hurricane evacuation routes in southwest Louisiana. Looking to our future, the boats will allow a greener transit experience with their upgradable electric thrusters.”

In the past when M/V Cameron II was in drydock, a temporary side-loading ferry was put into service. This allowed passenger vehicles to cross, but trucks longer than about 50’ were unable to use the ferry and had to detour approximately 100 miles around the Calcasieu Ship Channel. The two new boats will allow ferry service of commercial vehicles to continue uninterrupted.

In a joint statement, Senator Mark Abraham (Dist. 25) and Representative Ryan Bourriaque (Dist. 47) said, “On behalf of the legislators representing this area, we are proud that this project will become a reality. At the direction of the Cameron Parish Police Jury in 2014, work began on funding requests and grant applications for the replacement of M/V Cameron II, which is now two years shy of its 60th birthday. The only alternative to a reliable ferry at this location is an over two-hour long route to travel some 1,000 feet.

“There are few projects we have been fortunate enough to work on in our time in public service that are as impactful and needed as the Cameron ferry project. This one project has quality of life, economic competitiveness, tourism, and public safety implications that are beyond measure.

“We would like to thank the governor, Secretary Wilson, the DOTD staff, President Cortez, and Speaker Schexnayder. This has been a long time coming.”

The two new vessels will help reduce greenhouse gases by using battery-powered electric thrusters. The batteries will be charged by diesel generators on board but can be upgraded to fully electric in the future.

Construction of the two new ferries is expected to begin early next year with an estimated completion in mid-2025.