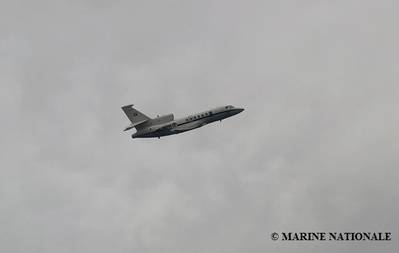 A French Navy plane is assisting in the search for eight crew still missing from sunken offshore tug supply vessel Bourbon Rhode. Three of the 14 crew members on board at the time of the sinking have been rescued, and three have been confirmed deceased. (Photo: Marine Nationale)

The bodies of two more crew members from sunken offshore tug supply vessel Bourbon Rhode have been recovered by search teams in the Atlantic Ocean, the vessel's owner Bourbon announced on Tuesday. Three crew members are confirmed deceased, three have been rescued and eight are still missing after the vessel sank in heavy seas with 14 on board near a category 4 hurricane on Thursday.

The bodies of two mariners were recovered at sea Monday night and transferred on the French navy Ventôse frigate, as the search continues for eight still missing, Bourbon said.

Earlier on Monday, the French vessel owner confirmed the death and recovery of one other crew members.

Three crew members in a lifeboat were spotted by a French search plane and picked up by a nearby commercial vessel on Saturday.

Bourbon first reported on Thursday that the Bourbon Rhode was taking on water and had issued a distress call while in transit some 1,200 nautical miles off the island of Martinique, and 60 nautical miles south-southeast from the eye of hurricane Lorenzo.

The search effort has since intensified, the company said. In all, 10 commercial vessels have been mobilized in the area as part of the search and rescue efforts. A French Navy search plane is performing daily overflights, supported by a US Coast Guard aircraft, Bourbon said. A French Navy frigate, accompanied by its helicopter, is coordinating the grid of nearly 40 search areas.

Corvus Energy, an energy storage solutions provider for the offshore energy industry, has won a contract with Wärtsilä to…