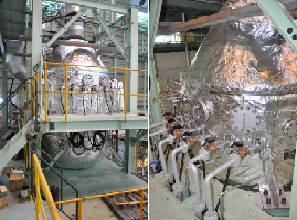 MAN Diesel & Turbo confirms that MAN B&W 6S46MC-C8 engine with integrated SCR fulfils the IMO’s strictest emission standards
The engine, an MAN B&W 6S46MC-C8 type capable of an output of almost 7 MW, was constructed in autumn 2010 by Hitachi Zosen Corporation at its Ariake works in southern Japan. The engine is bound for a general cargo carrier, to be built at the Nakai shipyard and scheduled to enter active service later this year. The vessel was ordered by Japanese customer,  BOT Lease Co. Ltd., and is operated by Nissho Shipping Co. Ltd.
The first engine-start took place in January 2011. In connection with this, MAN Diesel & Turbo dispatched a team to Japan to commission the engine-control system – the first in a series of planned visits. The team also optimised the integration of the SCR system that removes NOx from the engine’s exhaust gas.

Ultimately, MAN Diesel & Turbo confirmed  that, in a world-first, the engine meets all emission requirements as stipulated by the International Maritime Organisation’s Tier-III legislation, due to come into force in 2016.

Søren Jensen – Vice President Research & Development, Marine Low-Speed MAN Diesel & Turbo – said: “We haven’t just provided an engine and added an SCR system to it. On the contrary, we have delivered a bespoke system. As engine designer, builder and catalyst designer, MAN Diesel & Turbo and Hitachi Zosen comprise a group of specialists that have delivered an optimised propulsion/emissions package of engine, engine-control system and SCR system.”

Jensen concluded: “In the future, MAN Diesel & Turbo wants not only to develop engines but also to design engines with complete, emission-reduction systems. To that end, we envisage collaborating with many other partners in times to come in the same successful fashion as we have seen in Japan.”

Technical characteristics To achieve the desired, higher exhaust-gas temperature and maximise NOx removal, the different elements of the emissions package are laid out in series, with the SCR system placed before the turbocharger.