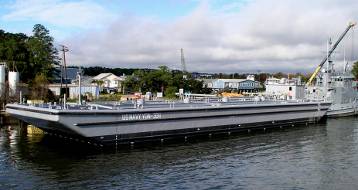 Metal Trades, Inc. announced the completion of YON 331, the second vessel of a new class of 14,000 barrel double hull fuel barges for the U.S. Navy.  The 200-ft x 52-ft barge was designed by Bristol Harbor Group of Bristol, R.I. to carry either Diesel or JP5 Jet Fuel in five cargo tanks. Metal Trades was contracted by Maybank Industries, located in Charleston, S.C..  The barge will be delivered to the Naval Supply Systems Command Fuel Depot facility in Norfolk, Va.  Several key design features include:

Shaun Flynn, Metal Trades’ VP of Operations said, “We are very pleased with positive feedback and complements received from our customers (Maybank Industries and NAVSEA) regarding the quality construction, house layout, and operational features of the barge.  Although we’ve built many smaller sized barge over the last five years, this is the first new barge program that Metal Trades has been contracted to design and build.  We worked closely with Bristol Harbor Group and the customer throughout the entire process.  This is a proud accomplishment for the Metal Trades - Maybank Industries team.”