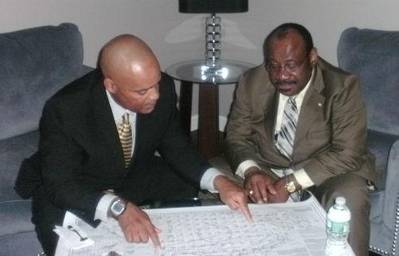 Victor Mooney of Queens with H.E. Anatolio Ndong Mba, Ambassador for Equatorial Guinea to the United Nations. The rower brief the diplomat on his plans to row across the Atlantic Ocean to encourage voluntary HIV testing.

Victor Mooney of Queens briefed H.E. Anatolio Ndong Mba, Ambassador for Equatorial Guinea to the United Nations on his upcoming 5,000-mile solo transatlantic row on Thursday. Afterwards, Mr. Mooney went into detail on his preferred rowing route and discussed the importance of having a formative support team.

The Head of State, H.E. Obiang Nguema Mbasogo, President of Equatorial Guinea, is the principal sponsor for the Goree Challenge. The rower recently met his patron during the United Nations General Assembly in September and emphasized the importance of voluntary HIV testing.