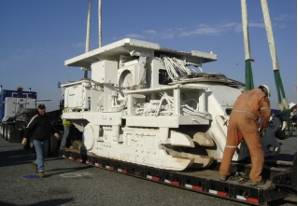 FESCO Logistics, a provider of worldwide logistics services and a division of FESCO North America, delivered a 100-ton roadheader to Novorossiysk, Russia for transshipment to Sochi, Russia for construction of the site of the 2014 winter Olympics.

The Alpine Miner ATM 105-IC is a boom-type roadheader of the 100-ton class. The piece of equipment is used for mechanized tunneling in hard and abrasive rock formations. The cargo was loaded onto a MAFI trailer, secured by 15 chain lashings, in Baltimore, Md. and carried via roll-on/roll-off vessel to Derince, Turkey and then transshipped to Novorossiysk, Russia.

To determine the location of the equipment at any time, FESCO Logistics is using a SaviTrak GPS sensor unit. Savi Networks provides automated wireless monitoring to improve shipment visibility and security across multiple transportation modes including ocean vessels, truck and rail.

The 2014 Winter Olympics, officially known as the XXII Olympic Winter Games, is an international winter multiple sports event that will be held from February 7 to February 23, 2014. The host city, Sochi, Russia, was elected on July 4, 2007, during the 119th International Olympic Committee (IOC) Session in Guatemala City, Guatemala. This will be the first time that the Russian Federation will host the Winter Olympics; the Soviet Union hosted the 1980 Summer Games in Moscow.