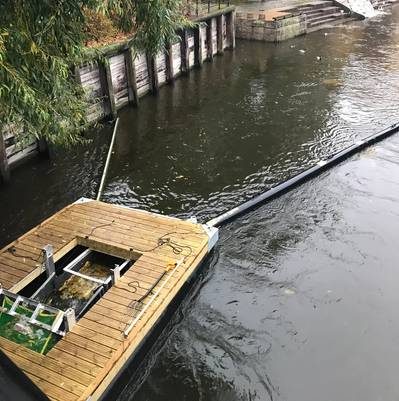 Trash Trawl in operation in the Akers river in Oslo.

SpillTech, aNorwegian company which specializes in oil spill recovery equipment and systems to collect waste in ports, is expanding its services to tackle waste pollution issues in rivers.

“Many rivers are becoming increasingly polluted, so it is important to collect as much waste as possible and that is the reason why we have developed a new waste collector system,” reasoned Trond Lindheim, managing director of SpillTech.

The system, dubbed Trash Trawl, is currently being tested by the Environmental Agency in the Akers river in Oslo. The system works on the high-speed boom principle that is common in oil spill recovery. It uses a boom system that feeds floating garbage to a meshed net, which is emptied two to four times on a weekly basis.

An important aspect of the development work has been to ensure that the equipment is easy to handle, and yet robust enough to withstand adverse river conditions according to Lindheim.

“It is a very simple, effective and robust way to collect waste and it is already producing positive results, gathering a lot of debris in the Akers river each week. Clearly, there is a need to develop new systems such as Trash Trawl to help address the increasing pollution problems in our rivers and also catch the garbage before it reaches out to the sea and causes further damage.”

SpillTech is currently in talks with local government agencies and international organisations to explore further applications of the new system.