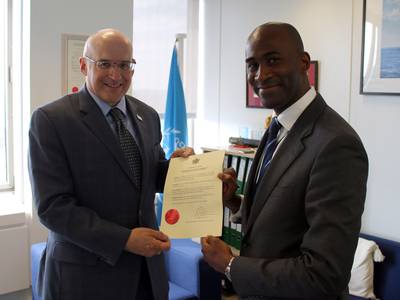 Tafawa Williams, Alternate Permanent Representative of Saint Lucia to IMO, met IMO’s Frederick Kenney, Director, Legal Affairs and External Relations Division, on May 26 to deposit the instruments of accession.
This brings the number of States party to the Ballast Water Management Convention to 50, representing 34.81 percent of the world's merchant fleet tonnage.
The full list of treaties acceded to by Saint Lucia is as follows: