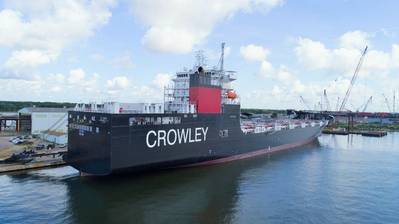 President Donald Trump is set to meet with Republican senators on Wednesday over a proposal to waive rules that only U.S.-flagged ships can move natural gas from American ports to Puerto Rico and the U.S. Northeast.

The nearly 100-year-old Jones Act mandates the use of U.S.-flagged vessels to transport merchandise between U.S. coasts. Bloomberg News reported last week the administration was seriously considering waiving the requirements for some energy shipments and that Trump was leaning in favor of some kind of waiver.

"I am going to go to the White House tomorrow to try to talk to the president out of doing something foolish and that is trying to curtain the Jones Act protections," Senator John Kennedy, a Louisiana Republican, told Reuters on Tuesday. "If that is his inclination, then (Trump) has been receiving some bad advice."

Kennedy added he wanted to make sure Trump heard "both sides of the story." Kennedy said waiving the requirements "would undermine the security of this country."

Republican Senator Roger Wicker of Mississippi, who chairs the Commerce Committee, and a number of other Republicans are set to attend the meeting that had not previously been made public, people briefed on the matter said.

A committee spokeswoman declined to confirm Wicker would attend but said he "is among a large, bipartisan group of House members and senators who resolutely support the domestic maritime industry and the hundreds of thousands of American jobs it produces."

In 2017, the Department of Homeland Security waived the requirement for one week to allow oil and gas operators to use often cheaper, tax-free, or more readily available foreign-flagged vessels to ensure enough fuel reached emergency responders during Hurricane Irma and following Hurricane Harvey.

A person briefed on the matter confirmed that administration officials were divided on the issue.

In February, leaders of the House of Representatives Committee on Transportation and Infrastructure wrote DHS to oppose a request from Puerto Rico to waive the Jones Act for 10 years to allow foreign tankers to move liquid natural gas to the U.S. island territory.

Democratic Representative Peter DeFazio, who chairs the committee, and Sam Graves, the panel's top Republican, said in the letter the Jones Act "has promoted economic growth and national security, and created hundreds of thousands of good paying jobs in our domestic maritime trades and shipbuilding industries."