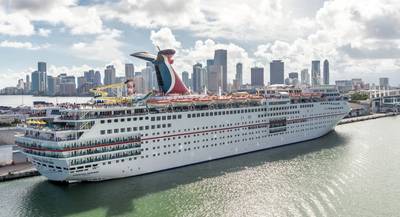 U.S. President Donald Trump on Friday said that major cruise lines would suspend cruises for 30 days, following a series of industry announcements that came after repeated transmission of coronavirus among passengers at sea.

“At my request, effective midnight tonight, Carnival, Royal Caribbean, Norwegian, and MSC have all agreed to suspend outbound cruises for thirty days,” Trump said on Twitter.

“It is a great and important industry – it will be kept that way!” he added.

Royal Caribbean Cruises Ltd said earlier on Friday it was suspending its cruises in the United States for 30 days, an hour after Norwegian Cruise Line Holdings Ltd said it suspended all its cruise voyages through April 11.

Costa Cruises accounted for 15% of Carnival’s overall capacity as of Nov. 30, offering voyages in Asia and Europe, including the Mediterranean.

The Princess Cruises unit has been in the spotlight after its Diamond Princess and Grand Princess ships were quarantined after they became hotbeds for coronavirus infections.

Norwegian, however, said no confirmed case of the virus was reported across its 28 ships.

Privately held MSC Cruises has canceled Caribbean cruises from Miami until April 30, as well as some other trips departing from destinations outside the United States.

The outbreak, described by the World Health Organization as a pandemic, has infected thousands in the Mediterranean countries such as Italy, where it has claimed more than 1,000 lives.

Carnival said it was checking if their guests are aged over 70 years and would deny entry to people with chronic or severe medical conditions.

Separately, credit rating agency S&P Global said it lowered the credit ratings on Carnival and its unsecured debt to ‘BBB’ from ‘A-‘, on expectations of a significant loss in revenue and cash flow in 2020.

Stocks of cruise operators are among the worst hit, with Carnival, Norwegian and Royal Caribbean down between 66% and 81% this year through Friday’s close.