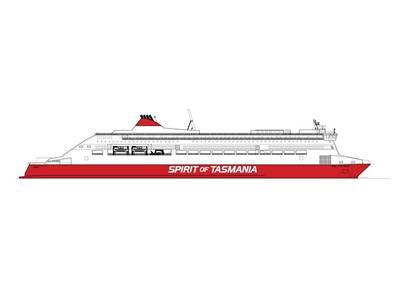 Australian ferry operator TT Line has withdrawn from a memorandum of understanding with Finnish shipbuilder Rauma Marine Constructions for the construction of two new car and passenger ferries as it investigates options to build the vessels domestically.

The Tasmanian government-owned operator, also known as Spirit of Tasmania, signed the MOU with RMC after canceling an initial contract with German shipyard Flensburger Schiffbau-Gesellschaft in February. Under the MOU, RMC was scheduled to begin building the two new 1,800-passenger, 48,000 gt ferries in 2021 for delivery at the end of 2022 and 2023.

TT Line withdrew from the MOU before construction contracts were finalized, and Peter Gutwein, Premier of Tasmania, announced Tuesday that the government will instead seek to produce the vessels locally to help offset economic impacts from the coronavirus impacts.

“We have a choice right now to invest around $850 million (US$696 million) offshore in Europe, or to explore all our options in this new post-COVID-19 environment to maximize benefits for Australian and Tasmanian businesses and the people they employ,” Gutwein said.

A task force including representatives from TT Line as well as state and federal government will be established to identify local procurement, purchasing and manufacturing options to deliver two new vessels to replace the 1998-built vessels Spirit of Tasmania I and II (formerly Superfast III and Superfast IV) on the Melbourne, Australia – Devonport, Tasmania route by 2028.

Tasmanian shipbuilder Incat said it "enthusiastically looks forward to an opportunity to meet with that taskforce".

"Incat are supportive of keeping Australian dollars within Australia and maintaining and indeed growing the employment opportunities for all Australians during these troubled times," the shipyard said in a statement.

“We will work closely with TT Line to consider how Tasmania can best maximize the economic and social outcomes both during the build phase and after delivery of the new vessels," said Michael Ferguson, Tasmania's Minister for Infrastructure. “We want to ensure that we fully explore all local and national options or possibilities before we to return to the market.”

Ferguson said the existing Spirit of Tasmania vessels are emissions compliant and can continue to operate safely and efficiently and meet demand well into the future.

"We are always ready to continue the negotiations with TT Line Company when the shipbuilding project is topical again," said Jyrki Heinimaa, RMC CEO.

"The situation is naturally unfortunate for RMC, but we are pleased to say that the withdrawal does not cause any immediate restructuring at RMC," he added.

RMC is currently building two RoPax ferries: Aurora Botnia for Finnish-based Wasaline and MyStar for Estonia-based Tallink Grupp, to be handed over in spring 2021 and early 2022 respectively. In September 2019 the shipyard secured a €700 million (US$808 million) contract from the Finnish Navy to build four multi-role corvettes for delivery by 2026.

"The execution of the projects under construction and the planning of the four multi-role corvettes will continue at Rauma shipyard as planned," Heinimaa said. "RMC will also focus on new and alternative prospects with attractive delivery slots."