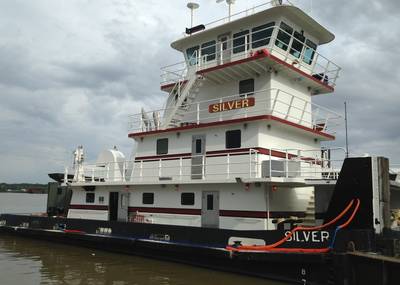 This tug was built and delivered by Conrad Industries and is the sister vessel to Harley Marine Gulf’s tug, 'Lightning' (named after well-known cowboy movie '4-legged friends').

Both tugs are equipped with two Cummins K38M Tier II engines, along with Twin Disc MGX5321 reduction gears., while the 'Silver' is powered by two Cummins 85kw generators and is outfitted with Nabrico Hydro Electric winches.

Harley Marine say that their commitment and dedication to the environment has been apparent in all aspects of its operations and has been their blueprint for success. The 'Silver' features Tier II engines which compared to Tier 0 engines reduce the production of Nitrogen Oxides (NOx) by forty-seven percent (47%). With this vessel, they estimate a twenty-two (22) ton reduction of annual emissions of NOx.

Harley Marine Services plans to add four more tugs to its fleet this year; the Alamo, the Fury, the Duke and the Stardust. All four tugs will join Harley marine’s expanding fleet in the United States Gulf Region. Each tug will be built with technically and environmentally advanced equipment to meet the specific needs of Harley Marine’s customers and expanding business markets.

Harley Marine Services is a leading provider of marine transportation services in the United States, with operations along the West Coast (including Alaska), New York Harbor and the US Gulf Coast. Services provided include the transportation and storage of petroleum products, ship assist and escort, the transportation of general cargo and rescue towing.