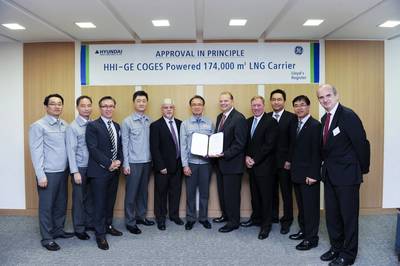 Hyundai Heavy Industries (HHI) announced it has jointly developed world’s first gas turbine-powered 174,000 m3 LNG carrier with GE Aviation and Marine and has secured Approval in Principle (AIP) on the vessel from the U.K.-based Lloyd’s Register.

The IMO Tier III-compliant 174,000 m3 LNG carrier is equipped with GE’s gas turbine-based Combined Gas turbine Electric and Steam system (COGES 2.0). The vessel is expected to save shipowners or operators an estimated 20 billion Korean won ($17.83 million) on the assumption that the LNG carrier operates for 20 years with an annual operating cost of $720,000, since it does not need additional equipment to handle exhaust emissions, HHI explained.

According to the shipbuilder, the gas turbine-powered engine is 60 percent lighter than conventional engines and will lower operating and maintenance costs accordingly. Durability and low vibration/noise of the engine are also test-proven over 70 million hours of application on offshore platforms, onshore power plants and high-speed ferryboats.

“The LNG carrier we introduce today is a culmination of the seamless teamwork of GE and HHI,” said Shin Hyun-soo, CTO of HHI. “We will continue to enhance our competitiveness through ongoing technological cooperation including the application of the gas turbine engine to large containerships.”

Revell Takes the Helm at SIGTTO