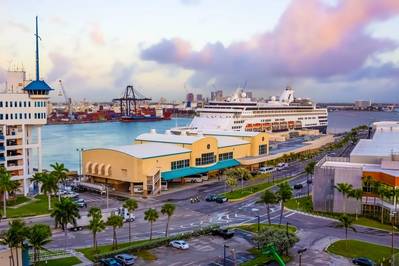 An ocean liner forced by a deadly onboard coronavirus outbreak to languish at sea since mid-March pulled into a South Florida port on Thursday, after authorities settled plans for the vessel and its sister ship to dock and most passengers to come ashore.

Arrival of the ships capped a nearly three-week ordeal during which about 100 passengers and dozens of crew aboard the Zaandam reported influenza-like illness and four passengers died as numerous Latin American ports along its route refused the vessel's entry.

Nearly two-thirds of the Zaandam's original passengers - those who cleared a medical screening - were transferred to the Rotterdam before the ships were granted passage through the Panama Canal on Sunday.

U.S. President Donald Trump intervened on Tuesday to urge Florida officials to accept the stricken cruise ship after Governor Ron DeSantis, a fellow Republican, had declared the Zaandam unwelcome, saying he did not want its sick passengers "dumped" in his state.

The governor relented once a "unified command" consisting of federal, state and local authorities reached agreement days later on a plan for repatriating the Zaandam, which departed Buenos Aires, Argentina, on March 7 for what was to have been a 20-day voyage to Chile. A second leg of the cruise had been due to end in Fort Lauderdale on April 7.

The Broward County Commission gave final approval to the plan, which is to be paid for by the cruise line, early Thursday.

'Controlled exit'
"These two ships have U.S. citizens on board. I think the Zaandam has 40, 50 Floridians, so I think we have an interest in making sure these folks come safely," DeSantis told a news conference on Thursday before the vessels arrived.

He said the arrival plan provides for a "controlled exit."

At least 26 passengers known to still be symptomatic but not requiring hospitalization will remain aboard the ships in port until they are well and declared fit for travel under federal health guidelines, according to details of the agreement.

Holland America said its medical staff would care for them.

Most of the remaining 1,200 some passengers, assuming they pass a medical screening, were expected to begin disembarking on Friday and be transferred straight to chartered flights home.

"Out of an abundance of caution, these guests will be transported in coaches that will be sanitized, with limited person-to-person contact and while wearing masks," the cruise line said.

Until Thursday, none of the Zaandam's passengers had been off the ship since March 14, with all confined to their cabins for the past 10 days, according to the company.

Holland America said 311 passengers are U.S. citizens, 52 of them residents of Florida. Those living near the port will drive home, the cruise line said.

None of 1,180-plus crew members from the two ships will be allowed off in Fort Lauderdale, though it was not clear when the vessels will leave and how their personnel will be repatriated.

Initial objections to the Zaandam's arrival had drawn a rebuke from Dr. Anthony Fauci, one of Trump's chief advisers on the pandemic, who urged Florida welcome the ships to port.

"You have to take care of the people who are ill. You just have an obligation to do that. And as quickly as possible. You've got to get the people who are not sick, who are not infected, off the ship," Fauci, who heads the National Institute of Allergy and Infectious Diseases, told CBS "This Morning" just before the deal was reported.

Keith Kobler, a passenger along with his wife, Doris, told NBC they were aware the country had undergone a major shift over the past month as the coronavirus spread nationwide.

"It's probably going to be strange for us," he said.