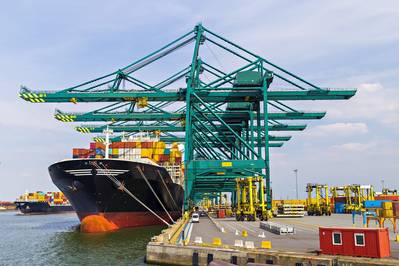 The world's number two container line MSC is in talks with the United Arab Emirates after the Gulf country banned one of their vessels from entering its waters over what authorities said was a breach of tough new sulphur emissions rules for ships.

This is one of the first punitive actions taken by a jurisdiction since regulations came into effect in January which make it mandatory for ships to use fuel with a sulphur content of 0.5%, down from 3.5% previously, or install devices that strip out the toxic pollutant - known as scrubbers.

Ships were no longer able to even carry high sulphur fuel from March without a scrubber onboard.

An advisory issued by the UAE's Federal Transport Authority (FTA) on March 16 and seen by Reuters said the FTA had banned the MSC JOANNA ship from operating in its waters for one year and had banned the vessel's captain from working on any ships calling at UAE ports, adding that it had initiated legal action against the master for violating the regulations.

The FTA did not respond to a request for comment.

The FTA advisory added that the vessel was found to be carrying over 700 tonnes of high sulphur fuel oil when it was boarded by officials at Jebel Ali port despite being given a repeated warning in advance to de-bunker the non-compliant fuel before arrival.

Swiss headquartered MSC said in a statement that it was holding discussions with the FTA, adding that the MSC JOANNA had only used compliant low sulphur fuel since January.

MSC said many shipyards in China, where scrubber installations were meant to take place, had been delayed by the impact of the coronavirus.

"MSC JOANNA is one of those ships which has been subject to an EGCS (scrubber) delay and has been carrying traditional marine fuel in a sealed tank to be ready for testing while we wait to find out when the installation will take place: it is currently scheduled for June 2020."

(By Jonathan Saul, Additional reporting by Alexander Cornwell in Dubai;Editing by Elaine Hardcastle)