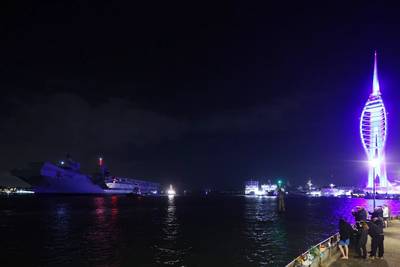 The U.K. Royal Navy aircraft carrier HMS Prince of Wales has left Portsmouth en route to Rosyth where the £3 billion aircraft carrier will receive repairs after breaking down off the Isle of Wight in August.

The 65,000-tonne warship will enter Babcock's dry dock in Rosyth where it will undergo repairs to its starboard propeller shaft which suffered a mechanical defect as the ship left for New York. Inspections by divers revealed the shaft coupling had failed.

Since the aircraft carrier returned to Portsmouth Naval Base in early September, the ship’s engineers have been working with divers and expert naval architects and engineers from Babcock and the MoD’s Defense Equipment and Support organization to work out what is needed to return HMS Prince of Wales back to operations.

The extent of and the timescale for the repairs will not be fully known until the ship is in dry dock and has been thoroughly inspected by engineers, the Royal Navy said. In the meantime, the 33-ton starboard propeller was removed ahead of her journey to the Firth of Forth.

Captain Richard Hewitt said, “Now that the initial engineering challenges have been overcome to allow us to sail, we will transit to Rosyth where we will continue to work hard with our industry partners in the dockyard to ensure the shaft is repaired as quickly as possible and return HMS Prince of Wales to the front line to continue her operations”

To prepare for the return to Rosyth, where the carrier was assembled between 2011 and 2017, the carrier’s navigation team have trained on a simulator alongside Forth pilots and tug captains at South Shields Marine School at the South Tyneside College to practice the approach to anchorage and sailing under the three Forth bridges and into the dry dock.

Lieutenant Commander Chris Poulson, HMS Prince of Wales’ Navigator, said, “Returning Prince of Wales back into the dock in which she was assembled will be a big navigational challenge.

“We of course know that she will fit, but it will be a huge team effort between the ship’s company, the Forth Pilots, the team ashore from Babcock and the towage company to get her in to the dock. As well as completing the maneuver safely, I am looking forward to taking the ship under the Forth bridges and seeing them from beneath for the first time.”

The ship has sailed with a full complement of crew – 750 men and women – who will remain with the ship and continue training for renewed operations as well as supporting the maintenance package while in Rosyth.

While under repair, her autumn program that included operating with F35B lightning, MV22 Osprey and UAVs off the Eastern Seaboard of the USA is currently being rescheduled for 2023. 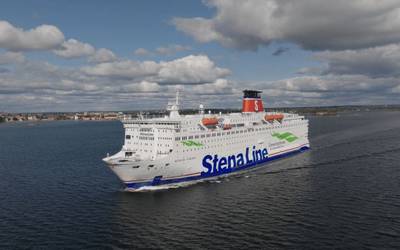