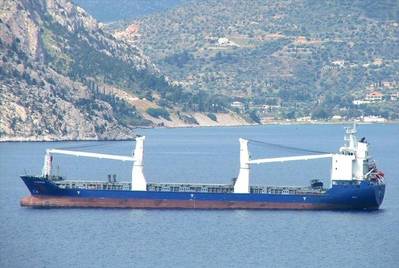 Ukraine asked Lebanon's top prosecutor on Wednesday to reopen a probe into a ship Kyiv says was carrying stolen grain that remains docked in Lebanon pending a seizure order.

Ukraine says the Syrian-flagged ship, in the northern Lebanese port of Tripoli, is carrying some 10,000 tonnes of flour and barley plundered by Russia following its February invasion.

Ukraine's ambassador to Lebanon, Ihor Ostash, told a news conference at the embassy near Beirut that the request to investigate further was based on new evidence gathered by a Ukrainian judge and handed over to Lebanon on Monday.

The Lebanese prosecutor, Ghassan Oueidat, lifted a first seizure order on the Laodicea ship he had issued last week after finding no criminal offence committed. Read full story But it remains unable to sail until at least Thursday due to another order from a judge in Tripoli.

Moscow has previously denied stealing grain. Russia's Embassy in Lebanon said it had no information on the cargo.

An official from the company that owns the cargo has also denied it was stolen and said the ship would sail to nearby Syria should it be allowed to leave.

Ukrainian authorities say the Laodicea travelled to a port in Russian-occupied Crimea closed to international shipping and that it took on cargo there before sailing to Lebanon.

Ostash added that a ship carrying 26,000 tons of corn, the first carrying Ukrainian grain to leave its Black Sea ports with cargo for international markets since Russia's invasion, would arrive in Lebanon within four to five days.

He said Ukraine remained committed to supporting Lebanon with grain shipments as Lebanon deals with shortages of basic goods including wheat amid a three-year financial collapse.