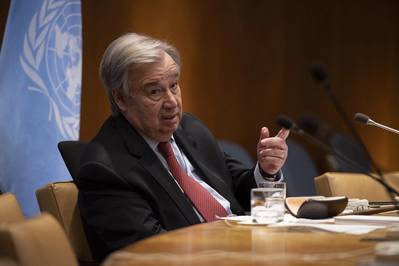 U.N. Secretary-General Antonio Guterres urged Yemen's Houthi group to allow an assessment team to travel to a decaying oil tanker that is threatening to spill 1.1 million barrels of crude oil off the war-torn country's coast.

More then a month ago Houthi officials said they would agree to allow a U.N. mission to conduct a technical assessment and whatever initial repairs might be feasible on the Safer tanker. But the United Nations is still waiting for formal authorization.

Guterres is "deeply concerned" about the condition of the oil tanker, U.N. spokesman Stephane Dujarric said on Friday. The United Nations has warned that the Safer could spill four times as much oil as the 1989 Exxon Valdez disaster off Alaska.

"He specifically calls for granting independent technical experts unconditional access to the tanker to assess its condition and conduct any possible initial repairs," Dujarric said. "This ... will provide crucial scientific evidence for next steps to be taken in order to avert catastrophe."

The Safer tanker has been stranded off Yemen's Red Sea oil terminal of Ras Issa for more than five years. The U.N. Security Council has also called on the Houthis to facilitate unconditional access as soon as possible.