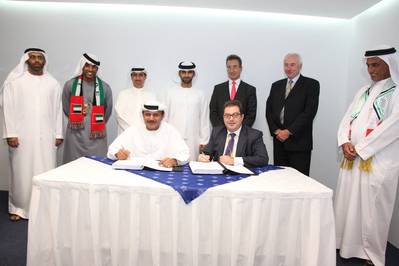 Sword of Honour for 2012 received for excellent safety credentials.

Drydocks World, a  service provider to the global maritime and offshore oil and gas industry has entered into a multi-million contract with Premier Oil, a well-known oil exploration and production company with interests in several countries, to build subsea facility for Solan oil field, at its Dubai based premium shipyard. The contract was signed at a gala ceremony in the presence of HH Sheikh Mansour Bin Mohammed Bin Rashid Al Maktoum.

The facility will be built for the field, which is located on the UK Continental Shelf West of Shetland and is operated by Chrysaor, a company engaged in developing and commercializing oil and gas discoveries in the North Sea and Ireland.

“We have achieved yet another breakthrough in penetrating the offshore oil sector with our superlative services by entering into this agreement with a reputed company like Premier Oil. The subsea oil tank is an essential component of a significant project, the Solan field, which is a future prospective resource of the United Kingdom. Our consistent emphasis on safety, quality and operating excellence has helped us acquire premium projects for industry leading companies and has helped in value addition to the advantage of our clients,” said Khamis Juma Buamim, Chairman of Drydocks World and Maritime World.

Simon Lockett, CEO Premier Oil said, “Premier is delighted to have awarded the contract for the construction of the subsea oil storage tank to Drydocks World. The subsea tank will constitute a critical component of the Solan field development and we look forward to working closely with Drydocks World to deliver the contracted works safely, on schedule and within budget.”

Drydocks World also received the prestigious Sword of Honour from the British Safety Council at a ceremony held in the City of London at Mansion House recently in the presence of the Lord Mayor of London and other dignitaries. The award is given to organisations who achieve exemplary standards in occupational health and safety management of which 80 companies worldwide received the award this year.