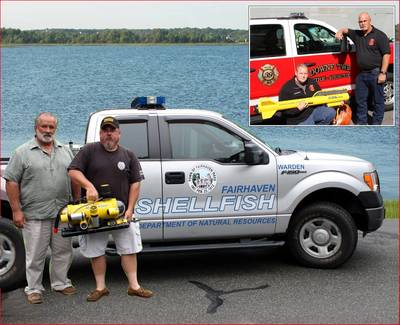 Deputy Jeff Hanson, leader of the Maricopa County Sheriffs Department dive team, reported his group had been searching for almost a month, without success, for a small plane that went down in a local lake. The team then borrowed a JW Fishers TOV-1 towed video system from a neighboring department. The TOV-1 has a torpedo shaped housing with a camera mounted behind a dome port. Towing the system is similar to towing a diver, except the TOV-1 can be towed up to 500 feet deep and stay submerged indefinitely. It eliminates the normal concerns of diving such as running out air, decompression sickness, fatigue and cold. Using the TOV-1 Hanson’s team located the lost plane in less than two days. The team has since acquired their own Fisher underwater video system.

Downe Township is located in Cumberland County New Jersey which borders Delaware Bay. Although the town has less than 2,000 residents, Downe Township Fire / Rescue has a dozen highly trained divers and the team is well equipped. All have knowledge in swift water and cold water rescue. To assist in locating drowning victims, sunken vessels, and submerged vehicles the team bought a JW Fishers SSS-600K side scan sonar. This high frequency sonar is capable of scanning 200 feet of bottom on each side of the towfish and produces detailed images of any object lying on the lake, river, or ocean floor. Scanning 400 feet of bottom with each pass of the vessel allows large areas to be searched quickly, saving days of dive time and increasing safety for team members.

The New England towns of Fairhaven and New Bedford share a common harbor. New Bedford is a fishing port that also has a vibrant shipping industry. Fairhaven is smaller, but its waterfront is a safe haven for many recreational boaters. Located on Buzzards Bay, Fairhaven’s land juts into the bay forming Sconticut Neck and West Island, along with several smaller islands which are good breeding areas for quahogs and soft shelled clams. The two towns share responsibility for the harbor’s safety and security. When New Bedford received a grant from the federal government for port security, it used the funds to acquire JW Fishers SeaLion-2 ROV. This highly maneuverable remote controlled underwater vehicle is equipped with cameras front and rear and can serve a number of functions around the port including checking the hulls of vessels for smuggled contraband, inspecting structures for potential terrorist threats like explosive devices, locating pollutants dumped in the harbor, and finding sunken vessels. Easily deployed by one person, the light weight vehicle is equipped with scanning sonar which allows the operator to view a 200 foot area around the ROV even in zero visibility conditions. The Fairhaven Harbormaster has been charged with the responsibly of operating the ROV and assists the town’s law enforcement agencies as needed. As a secondary use, the ROV helps monitor the area’s shellfish populations.

South Carolina’s State Law Enforcement Division (SLED) provides manpower and technical assistance to law enforcement agencies across the state, as well as conducts investigations when directed to do so by the governor or attorney general. To assist in their operations SLED has acquired several of JW Fishers hand-held underwater metal detectors. An essential tool for locating evidence disposed of in a waterway, these metal detectors routinely assist police divers in finding weapons, shell casings, stolen objects, and explosive devices.