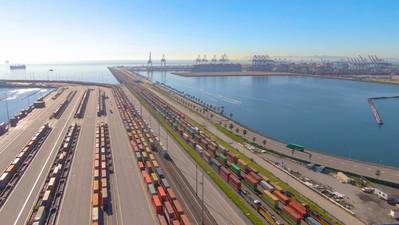 Railway by the Port of Los Angeles - Credit:helivideo/AdobeStock

Union Pacific Corp container shipments from U.S. West Coast seaports to one of the railroad's major hubs in Chicago will restart early next week after a seven-day suspension, Chief Executive Lance Fritz told Reuters on Thursday.

The railroad on Sunday night paused cargo shipments from the ports of Los Angeles, Long Beach, Oakland and Tacoma to its Global IV facility in Chicago in a bid to clear "significant congestion."

"We're starting to see containers clear, so I anticipate in the seven-day period ... we should get back down to a reasonable kind of a normal backlog of stack containers," Fritz said.

The suspension is predicted to worsen backlogs in the system - particularly at the Los Angeles/Long Beach seaport complex, which is the No. 1 ocean trade gateway for goods from China.

"These congestion issues are like a balloon where you push in one place and it bulges in another," said Larry Gross, president of Gross Transportation Consulting in Colorado.

The Los Angeles/Long Beach port complex has been inundated with containers since last summer and has not had time to clear backlogs ahead of the coming holiday peak shipping season.

Containers slated to leave the Ports of Los Angeles and Long Beach by rail sat on the docks an average of 11.8 days in June, up from 10.5 days in May, according to PMSA, which represents vessel operators and owners and operators of marine terminals.