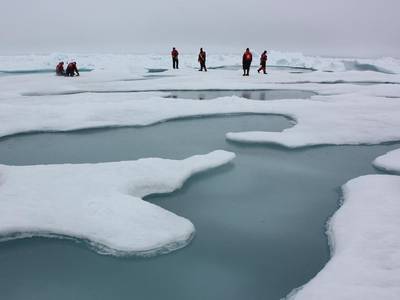 The U.S. Interior Department on Tuesday upheld a 2008 lease sale in the Chukchi Sea off Alaska, moving Royal Dutch Shell a step closer to returning to oil and gas exploration in the Arctic since it suffered mishaps in the region in 2012.

"The Arctic is an important component of the Administration's national energy strategy, and we remain committed to taking a thoughtful and balanced approach to oil and gas leasing and exploration offshore Alaska," said Interior Secretary Sally Jewell.

Interior's Bureau of Ocean Energy Management will next consider Shell's exploration plan and perform an environmental assessment on it, which could take at least 30 days.

Shell lost control of a massive oil rig called the Kulluk in 2012, which eventually ran aground. But in anticipation of returning to the region for the first time since then, Shell has already moved rigs to Alaska.

Many environmentalists oppose energy exploration in the offshore Arctic, saying that once production comes on line any oil spill would be extremely difficult to clean up in a remote area with rough and frigid seas.

Oil industry interests say the Arctic will be important to the country's energy security in coming decades when output from shale formations wanes.