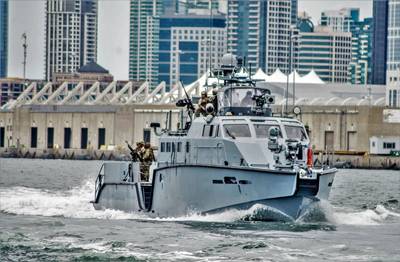 The U.S. State Department approved the possible sale to Ukraine of up to 16 patrol boats and related equipment for an estimated $600 million, according to a statement from the Defense Security Cooperation Agency on Wednesday.

"The proposed sale will improve Ukraine’s capability to meet current and future threats by providing a modern, fast, short-range vessel. Ukraine will utilize the vessels to better defend its territorial waters and protect other maritime interests," the agency said in the statement.

"This proposed sale will support the foreign policy goals and national security objectives of the United States by improving the security of a partner country that is a force for political stability and economic progress in Europe," it added.

The Mk VI patrol boat is currently used by the U.S. Navy as a part of the Navy Expeditionary Combat Command’s (NECC) fleet of combatant craft to patrol shallow littoral areas beyond sheltered harbors and bays and into less sheltered open water for the purpose of force protection of friendly and coalition forces and critical infrastructure.

Powered by twin diesel engines and water jets, the Mk VI is capable of speeds in excess 30 knots at full load and a range in excess of 600 nautical miles.