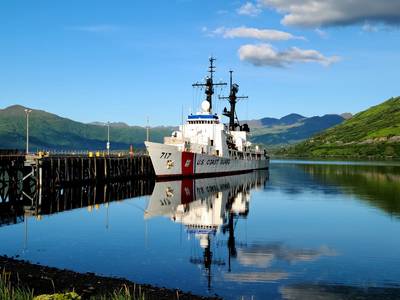 One the U.S. Coast Guard's last remaining 378-foot high endurance cutters recently wrapped up its final patrol before its scheduled decomissioning in August.

The the 52-year-old Mellon is one the last remaining 378-foot high endurance cutters built for extended offshore patrols. Its capabilities span from helicopter operations to pursuit boat operations and served as a key asset for the Department of Homeland Security and humanitarian missions at sea.

The Mellon was the third of the 378-foot high-endurance class to be completed and the first cutter to be named after Andrew W. Mellon, the 49th secretary of the treasury, who served between 1921 and 1932. The cutter’s keel was laid July 25 1966, and the ship was launched February 11, 1967.  It was commissioned eleven months after its launching on Jan. 9, 1968. The construction cost for the vessel totaled approximately $14,500,000.

The vessel was originally homeported in Honolulu and spent 12 years patrolling the Pacific Ocean from Hawaii to Alaska. It was then transferred to Seattle in 1981.

The Mellon returned to Hawaii after service in Vietnam. Many rescue efforts took place during its Hawaii patrol. In 1974, crew members of the Italian supertanker Giovanna Lolli-Ghetti survived an explosion, fire and subsequent sinking of the vessel off the coast of Hawaii. The Mellon responded and played a key role in rescuing the crew members.

The Mellon and its crew also experienced tragedy and damage while stationed in Hawaii.

The vessel was docked in the Dillingham Shipyard for repairs and maintenance on September 7, 1971, when an explosion occurred aboard, which resulted in the death of a civilian who was installing insulation. Extensive damage to the vessel included buckling of the deck, hull and frame. More damage occurred in April 1972, while unmooring in Kodiak Harbor. The vessel touched bottom and sustained damage to the sonar dome and the bow thruster unit.

Awards that the Mellon and its crew members received include the Meritorious Unit Commendation for operations conducted between June 28, 1975, and February 2, 1976.

The award was given to the Mellon crew for their response to four search and rescue cases, investigating and disproving allegations of violations of the Unimak Island Crab Sanctuary. Crew members of the vessel also reported the illegal discharge of oil into the sea by two Russian trawlers to authorities. Gunnery operations on the Mellon earned the unit the Commandant’s Gunnery Award in October 1999.

Two notable rescue efforts were accomplished in 1982. The first rescue was conducted with the Boutwell crew, other military units and a merchant ship. The Mellon rescued passengers from the burning luxury liner Prindsendam off the Alaskan coast. The combined effort rescued a total of 510 passengers and crew members from lifeboats after they abandoned ship. The second rescue effort saved four crash survivors from a Coast Guard C-130 aircraft on Attu Island.

The Mellon operated in areas 150 miles from the Soviet Union to areas off the coast of California after it was recommissioned. It patrolled areas in the North Pacific from the Gulf of Alaska and the Aleutian Islands into the Bering Sea. It spent three months of the year engaged in extensive training and exercises with the U.S. Navy off the coast of Southern California.

In January of 1990, the Mellon was the first of five Coast Guard cutters to become fitted with an anti-ship missile. The cutter also received an anti-submarine warfare suite that included the AN/SQS-38 sonar and Mark 46 torpedoes. The suite and anti-ship missile served as proof of capability for all Coast Guard cutters; however, they were later removed due to budget constraints.