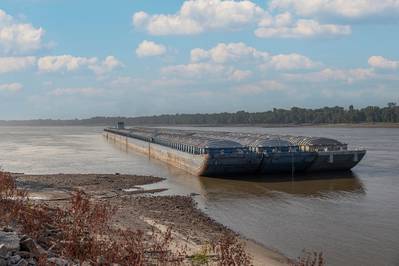 U.S. soybean exports are trailing their normal autumn pace despite rising supplies from an accelerating harvest, as low river levels have slowed the flow of grain barges to export terminals, according to U.S. Department of Agriculture (USDA) data issued on Monday.

Low water on the Mississippi River and its tributaries has slowed the delivery of grain barges to export terminals along the Gulf Coast, where some 60% of U.S. crop exports exit the country.

The latest supply-chain snarl comes at the start of what is normally the busiest period for U.S. crop exports, including top cash crops corn and soybeans.

Shippers have reduced barge tows by nearly 40% and cut the amount of grain loaded in each barge to prevent groundings in drought-parched waterways. The Army Corps of Engineers, meanwhile, has been dredging sections of the Mississippi and Ohio rivers to deepen their shipping channels.

But without more rain, shippers worry that Louisiana Gulf terminals will struggle to source enough grain to meet their export commitments.

The Mississippi River at Memphis, Tennessee, one choke point that was closed for several days of dredging earlier this month, is projected to drop to its lowest level on record this week, according to the National Weather Service.

The USDA said 1.882 million tonnes of soybeans were inspected for export in the week ended Oct. 6, up from 976,877 tonnes the prior week but below the 2.451 million tonnes inspected in the same week last year. Just 32% of that volume was inspected at Louisiana Gulf terminals, while total season-to-date inspections were down 23% from last year.