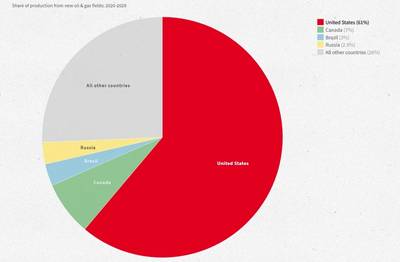 A staggering 61% of the world’s new oil and gas production over the next decade is set to come from one country alone: the United States.

According to a report by Global Witness, the sheer scale of this new production dwarfs that of every other country in the world and would spell disaster for the world’s ambitions to curb climate change – the effects of which we’re already witnessing through massive heat waves, flooding, and extreme weather.

Earlier this year, we crunched the numbers from the latest climate science and industry forecasts and found that we can’t afford to drill up any oil and gas from new fields anywhere in the world if we’re to avoid the worst impacts of climate change.

In our analysis, we assumed that existing oil and gas fields are going to keep on pumping for as long as they can. That means that the decisions about new projects will shape the future for the oil and gas industry and our climate.

And when it comes to these new oil and gas fields, production from the US is set to eclipse the rest of the world.

Production from new fields in the US is set to be eight times that of the next largest producing country – Canada. New US production is forecast to be 20 times that of Russia and more than 1.5 times the total of all other countries combined.

Output is set to be so vast that if US states were treated as countries, Texas is forecast to be the biggest producer of new oil and gas in its own right, with production nearly four times that of Canada.

Seven out of the top 10 biggest oil and gas producers would be US states, with only Canada, Brazil and Russia making it onto the list. Pennsylvania is set to be the third largest producer of new oil and gas, producing more than double that of Russia.

If things don’t change, by the end of the next decade, new oil and gas fields in the US will produce more than twice what Saudi Arabia produces today.