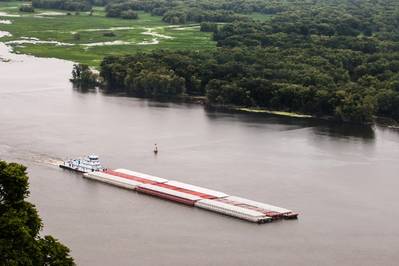 The U.S. soybean crop that farmers harvested in the fall of 2021 was the largest on record, as yields were bigger than previously estimated, the U.S. Agriculture Department said on Wednesday.

The higher U.S. production view comes as global demand for the oilseed soars and forecasts for South American harvests are cut due to hot and dry weather in key growing areas.

Soybean futures briefly turned higher after the data was released.

"They lowered Brazil and Argentina," said Jim Gerlach, president of A/C Trading. "I think it means that we're going to be hyper, hyper sensitive to weather down there."

The government also said U.S. farmers seeded 34.397 million acres of winter wheat, the most in six years, sending wheat futures to session lows. But domestic supplies of wheat were tight, with stocks on Dec. 1 at a 14-year high of 1.390 billion bushels.

Analysts were expecting the report to show a soybean harvest of 4.443 billion bushels, based on an average yield of 51.3 bushels per acre, according to the average of estimates given in a Reuters poll.

USDA cut its forecast for production in Brazil, the top soybean grower, by 5 million tonnes to 139.00 million tonnes, below the Brazilian government's Tuesday forecast.

USDA also lowered the outlook for Argentina's harvest to 46.50 million tonnes from 49.50 million. The new estimates were below analysts' expectations.

USDA also said that the most recent U.S. corn harvest was the second-biggest ever, at 15.115 billion bushels. That was up from the government's December estimate of 15.062 billion bushels and above the average of market forecasts.

The government lowered its outlook for the corn harvests in Brazil and Argentina.