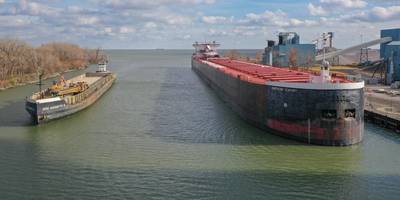 U.S. Great Lakes ports and the St. Lawrence Seaway are reporting a rush of activity as manufacturers stockpile raw materials and businesses take advantage of the congestion-free waterway to export overseas with just two weeks left of the season, the Chamber of Marine Commerce reports.

“U.S. Great Lakes ports have roared back this year – recovering from major 2020 declines in traditional cargoes like iron ore and steel but also developing new business and seizing on opportunities for infrastructure investment. This story of recovery and renewal is mirrored in the latest St. Lawrence Seaway cargo numbers,” said Bruce Burrows, president and CEO of the Chamber of Marine Commerce. “Throughout the pandemic and amidst global supply chain disruptions, Great Lakes-Seaway shipping has once again proven it’s a reliable, ‘safe harbor’ in a storm.”

According to the latest figures from the St. Lawrence Seaway, general cargo shipments, including steel, aluminum and oversized machinery, from March 22 to November 30, are up 71%. Iron ore shipments are up 17%, while dry bulk shipments including construction materials like stone, cement and gypsum, have increased by 6%, compared to the same period last year.

Overall, cargo shipments via the Seaway between March 22 and November 30 totaled 33.3 million metric tons, a rise of 1.7% from 2020. Slower grain exports due to smaller harvests compared to 2020 continue to offset the growth in other cargo sectors. Without grain factored in, overall tonnage numbers would be up 13%.

At the Port of Cleveland, November general cargo tonnage improved by more than 50% compared to November 2020, which included gains in steel, project cargoes, and containers. In addition, business at its bulk terminal continued an upward trend due to the strong demand in iron ore. Overall, business levels are up significantly compared to 2020, and the port anticipates that continuing into 2022.

David Gutheil, Chief Commercial Officer for the Port of Cleveland, said, “The Port has experienced a significant increase in container activity due to the challenges in the global supply chain, as cargo owners search for alternatives to traditional coastal routings. We have positioned our port as a viable solution for container trade and are in the midst of significant discussions with numerous parties to further increase our container business at the start of the 2022 season.”

He added, “As we strive to diversify our cargo base, the Port of Cleveland has recently come to an agreement to handle non-hazardous bulk liquid cargo beginning early in the third quarter of 2022. The cargo will originate in southeast Asia and is a food-grade additive which is used as a substitute for traditional trans fatty ingredients. This cargo will be transloaded directly from vessel to rail cars through a pumping station located at the Port. We anticipate that this will bring over 100,000 metric tons of new cargo, and approximately 1,000 new on-dock rail car moves, to our operation by the end of the 2023 season.”

In November, the Port of Toledo surpassed 10 million tons for the season, 22% ahead of 2020 volumes. Iron ore continued to lead the surge, up more than 62% from the previous year fueled by activity at the Cleveland Cliffs direct reduction plant. Aluminum shipments bolstered general cargo tonnage that was up 26%, followed by coal up over 13%.

"It has certainly been a good year so far for our seaport," said Joseph Cappel, Vice President of Business Development for the Toledo-Lucas County Port Authority. "Not only is our tonnage up, but we are also continuing to make investments in our terminal facilities paving the way for a successful future."

The Ohio Department of Transportation recently announced that the Port of Toledo would receive $3 million in grant funding through the Maritime Assistance Program for a new bulk material conveyor system and $4 million to add to the $20 million already allocated for rehabilitating the dock wall and constructing a liquid bulk transfer facility at the port's general cargo facility operated by Midwest Terminals. Cappel added, "These grant funds will help us take the general cargo facility to a new level of operational excellence as we continue to modernize our facilities. This is a great way to end the year and we truly appreciate the partnership we have with the Ohio Department of Transportation."

The Port of Monroe was also busy in November as vessels from the American Steamship Company and Interlake Steamship Company delivered cargoes of coal to the DTE Monroe Power Plant. The power plant received coal from both Superior, Wisconsin and Sandusky, Ohio.

The articulated tug/barge (ATB) Undaunted/Pere Marquette 41 called on the Port of Monroe twice during November to load cargoes of synthetic gypsum. One load was delivered to Port Colborne, Ontario and one load to Alpena, Michigan. December will be a busy month for the Port of Monroe with liquid asphalt and steel coil cargoes.

For the season, iron ore continues to reign as the port’s tonnage king, closing in on 18 million short tons through November 30. That total ranks 21.7% ahead of the five-season average and 37.1% above last year’s pace.

General cargo closed out the November highlights with nearly 7,000 short tons moving through the port. This pushed the seasonal total over 42,000 short tons, which is more than double the five-season average.